Changing Your Life Path: How To Beat The Fear 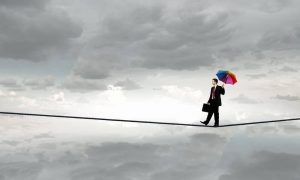 In my introduction to this series on changing your life path, I identified four obstacles that often stop us cold. The first of these is getting into gear. The second is fear—raw, paralyzing, debilitating fear. In this post, we’ll look at how you can beat the fear.

Let’s get something straight right up front: Fear sucks. It’s painful, it can stop you better than any brick wall, and way too often it causes us to chew ourselves up (“I’m such a coward/wuss/wimp/etc.”)—which only doubles our pain.

It’s probably not going to make your day if I tell you that fear is normal, it’s part of being human, and that the alternative implies there are six feet of dirt and worms above you.

Instead, you’re going to be like: I don’t care. Fear is keeping me stuck on the same damn path I’ve been on since kindergarten. Tell me how to get rid of it.

Beat the fear: The bad news

So—the bad news. If you want to keep growing and challenging yourself, fear will always be a part of your journey. The only way to escape fear is to hole up and stay right where you are, never doing anything new, never challenging yourself, and never reaching out beyond your familiar. For some, this could be a totally satisfactory way of living. But for those who want to more fully embrace life or who are tired of where they are and want to be somewhere else—maybe not.

If fear is always with us, how do we move forward? You may be hoping that there is some therapeutic procedure or transformational technique that will render you fearless; some easy fix that will allow you to jump fearlessly onto your new path. In search of it, you read self-help books, check in with your therapist, or hold tight, staying right where you are, hoping your fear magically passes.

You will be waiting for a very long time.

How do we bust out of our paralysis and get to the other side of our comfort zone? There is only one way (sans booze or drugs): By learning not to be stopped by our fears. Or, more heroically, by juicing our courage.

We master our fears by getting a better understanding of what causes them and then—simply—going out into the world and doing what scares us. There’s no better way.

Your first step in not being stopped by fear is to understand that what you fear is not the action itself, but the uncomfortable feelings that may accompany that action. The sting of rejection, the humiliation of making a fool of yourself, the distress at failing. These feelings can be painful, but unlike, say, being attacked by a knife-wielding street punk, uncomfortable feelings rarely land us in the emergency room. We tend to survive them.

Every time you are confronted by a fear, ask yourself if avoiding the uncomfortable feelings is more important to you than what you have set out to accomplish. If no, press on.

Our fears are caused by how we see ourselves and the world. Some people, for example, thrive on cold calls, while others are terrified. Same activity, but two different responses to it. The reason for these differences lies within each person’s worldview, technically known as an interpretive structure, but popularly known as a “mindset.” Mindsets are not reality—they are our interpretation of reality. Our mindsets are made up—usually not consciously but still made up. Our fear is a byproduct of our mindset. Cold calling is scary to some because their mindsets are saying: “I’m not good enough,” “I’ll make a fool of myself,” “I’m not important,” or any of a thousand different possibilities.

Since mindsets are not real, they can be changed. You beat the fear by changing your mindset. If your mindset sees a “no” or rejection as a hit to your self-worth, consider changing to a more powerful mindset. For example, sales is a numbers game. You get one sale for every ten or twenty or hundred calls you make. That means that you need to generate a lot of nos before you can get a yes. Thus a no is a necessary and valued step to your next yes. New mindset: Nos are important steps to getting a yes.

Start small and with humor. Break down whatever it is causing your fear into small manageable steps and then take each step one at a time. Several years ago, I worked with a client who was afraid of being rejected (he was in his 50s and still single). We created a game where he had to generate a rejection a day. He’d ask the bus driver if he could drive the bus, the Starbucks manager if he could stand at the door and be a greeter, and, after eating the burger, he went back to the counter with his empty bun and asked for a refill. (To see rejection raised to an art form, take a look at this TED talk).

As my client became habituated and lost his fear to one level of rejection, we stepped it up—singing in a karaoke bar, posting an online dating profile, texting and then meeting women, and eventually asking for a date face to face.

Take it small, slow, and easy. This is the best way for you to take ground.

On the other side

Then, too, there can be a rush of exhilaration when we come out on the other side. Even if we flub what we’d set out to do, the very fact that we did it is a victory.

Next time you are up against a fear, remember that sitting in your swamp of painful feelings on this side of the action is usually more agonizing than how you’ll feel on the other side. You beat the fear by going through it.

Every one of us has their fears. Only sociopaths are fearless. If you’re not a sociopath, cut yourself a break—you’re just one of us.

Where it’s the darkest

Where you are most afraid to go—the darkest part of life for you—is probably where your greatest rewards lie. Think for a moment of what it would mean for you if you could do what you are now most afraid of. How would that open up your life or make it more fun and satisfying?

In the end, this is the question you face: Do you want to live a small life to avoid fear, or are you willing to accept fear in return for living a big life? You can sit in your swamp for days, weeks, or even an entire lifetime, or you can grit your teeth and bust through the fear to make big things happen.

Beat the fear by getting started

If you are ready to jump off you’re the life path that has you living small and onto a different one that will have you living big—let’s chat. Find me here.