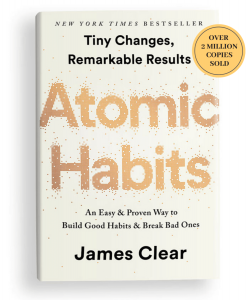 I read Atomic Habits, James Clear’s book on how to break bad habits and create new ones, out of desperation. Few of my clients come to me to reform their habits, but reforming them is often essential if they want to move forward on their life projects. What happens, inevitably, is that they sabotage themselves by their old ways of doing things—the old ways that they want to escape—and don’t make any progress on their new directions.

As an ontological coach, I had worked out a series of ontological procedures to support my clients in changing their habits, however, I wasn’t fully satisfied with the results. The science of how to change human behavior is a hot research project, so I knew there would be some good ideas out there. I just needed someone to read and digest the literature so that I wouldn’t have to. James Clear has done it and done a good job.

Habits are automated behaviors that you deploy to produce a result. Because they are automated, they relieve you of spending much or any conscious time and energy to produce the result. They are like modules or little subroutines that you can (with effort) modify when you want something else to happen. Habits sit midway between our consciousness (which is extremely limited in what it can do) and our unconscious processes that run most our lives (e.g. regulating body temperature, maintaining balance, fighting infections, etc.)

But still modifying them isn’t always easy. Even when the results are clear, say heart disease (and early death) as a result of stress, bad diet, and no exercise—folks can have an extremely difficult time laying off the butter and digging into the tofu.

Four steps to changing your habits

Clear lays out a straightforward, four-step process for creating a new habit:

Ridding yourself of a bad habit is the reverse:

There are five important lessons that support the four steps.

How you perceive yourself determines your actions. If you see yourself as a couch potato it’s going to be more difficult to get to the gym than if you shift to seeing yourself as an athlete. Managing your identity—or the story you tell about yourself—is a cardinal tenet of ontological coaching. Your understanding of yourself is a story, an interpretation—one that you have tended and nurtured so assiduously over your lifetime that it seems true and real. But it’s not—all you need do is check-in with the folks who know you and you’ll find they have differing interpretations of who you are. Because your understanding of yourself is an interpretation and not fact, you can shift it. It may take some work, but it’s totally doable.

Second, will power is overrated

Worse, it’s a trap. When you rely on will power to do something new, you almost always fail. You then use this failure to prove that you can’t change, that you really are a couch potato. To keep you in action you need to create a structure that supports the action. Clear’s book is all about how to create a supporting structure. The lesson is that if you’re not getting the results you want—don’t blame yourself or use it as an excuse to readopt your old identity—make changes in your structure.

Many years ago, I had a client who could not stop spending money. So we froze his credit and debit cards in a metal (so he couldn’t microwave it) pot of water. It took him 15 minutes to thaw them out, which was enough time for his better angels to kick in and stop him from spending impulsively.

Third, let there be consequences

It is curious to me that in all my coach training, “consequences” are not a coaching tool. In coaching, when a client commits to doing something and then doesn’t, there are no consequences in the coaching session as a result. This tends to irritate the latent Puritan in me. I had one client who was unemployed and facing eviction but would not do the work he needed to do to find a job. After months of fruitless struggle, I finally made him pay $50 to the organization he most loathed every he didn’t do what he’d committed to.  That motivated him and he’s now employed.

Clear suggests consequences when habits are broken or ignored and he had several good ideas. (Paying $5 to the first five people who respond via tweet every time he blows off a commitment). Sometimes sticks are more effective than carrots.

I have seen massive, world changing transformation happen in people in just seconds, but for most of us, true transformation—when we become different people than we are now, happens most reliably at the end of many small steps. The person who plans to lose 50 pounds in a month is less likely to succeed than the person who gives themselves a couple of years. Clear breaks down small steps into nano steps if that’s what it takes to get someone started. He suggests that if you are having trouble getting to the gym, start by putting on your sneakers and walking around the house for just one minute.

Go as far as you can and then take one more step. Stretch your capacities.

How to change your habits is obvious

Like so many things, once the process of changing your habits has been explained to you, it looks obvious. There is not a lot of rocket science in Atomic Habits. There’s not much that is going to blow the top of your head off and it would be very easy to dismiss it as common sense, stick the book back on the bookshelf, and head for the remote.

The difficulty, of course, and ironically, is putting rubber to the road. Even though it may be obvious, that still doesn’t get you in action. Clear tries to make it easier for you by offering many different aids—activity sheets, habit journals, and the like. He is, in fact, tremendously generous in the material he offers after you’ve bought his book.

However, Clear risks overwhelming his readers, and an overwhelmed reader puts the book back on the shelf.

I suggest you ignore everything Clear has told you except the basics—the four steps. Pick one habit that you want to adopt or one that you want to get rid of and set up a structure to support you in making that happen. If you’re not getting the results you want, check in with Clear again, find one more suggestion that would make a difference, and add it to your routine.

Once you’ve got one new habit up and running, try a second. Bring more of Clear’s ideas into your habit-forming structures as needed.

Rinse and repeat until it’s working for you.

Your long-term goal is to create the habit of developing yourself. Get that down and, in time, you won’t be unrecognizable.